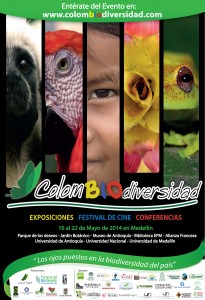 ColomBIOdiversidad took place in Medellin from the 16th to the 22nd of May 2014.

The festival celebrated Colombia’s status as the world’s second richest country in terms of biodiversity by holding various events – including conferences, film festivals, expositions and public debates- in public spaces where everyone could join in. http://colombiodiversidad.com/
Colombiodiversidad is organised by Envol Vert and aims to make as many people as possible aware of the importance of nature and biodiversity in Colombia. This event was made possible thanks to the help of 50 volunteers, 7 sponsors and 27 partners, who offered both financial support and help in publicising the event as widely as possible.

‘I’m truly impressed to see how such an ambitious festival could be organised in such a short space of time and on such a limited budget. The team of organisers were passionate, dedicated to the social benefits of their cause and extremely efficient in their work. It is, for several reasons, difficult to carry out this sort of project successfully, especially when relying principally on the help of volunteers. I would like to congratulate them once again for having got their message across so clearly, and to thank them for all the hard work which went into organising this event.’ Juan Rodríguez, member of Wild Touch.

What a success! Overall, more than 1,500 people attended ColomBIOdiversidad, more than 50,000 saw the three photo exhibitions, half of the town’s residents saw at least one of the posters for the ‘if trees could talk to us’ exhibition, over 900 people followed us on social networking sites and the promotional Youtube video for the event received over 1,600 hits. Last but not least, we received media coverage in over 10 different organisations. It just goes to show that where there’s a will, there really IS a way!
‘The ‘if the trees could talk to us’ competition seems like a great idea to me, the town looks really pretty covered in lots of little posters which are, I have to say, all as good as each other. This competition has reminded me of the beauty and the perfection but also the simplicity of life. It was a strong idea and I’m thrilled to have been able to take part. Thank you!’ Nadia Mendoza, competition entrant.
We believe that by promoting biodiversity, we can create a better understanding, interest and concern on the part of the public to conserve the great natural richness of their nation.
‘ColomBIOdiversidad has been a festival of great importance to our region as it has made the town’s inhabitants aware of the need to respect and protect their trees. Furthermore, the event is part of a wider social movement to allow the locals to take responsibility for their biodiversity in Medellin and in Colombia as a whole.’ Council representative for the protection of the Environment in Medellin.