The Sierra Nevada is a forest region of vital importance in terms of conservation, but which is highly threatened by the adverse effects of climate change.

This project aims to reforest the zone by developing economic alternatives to deforestation for local communities.

The Sierra Nevada has been listed as a World Heritage site in 1979, a national natural park in 1994 and as a priority conservation area, yet every year an estimated 100,000 trees in the zone are cut down by the 500 loggers who work there illegally.

The Sierra Nevada has a distinct ecosystem characterised by tropical rainforest and a thick layer of low-lying clouds. It benefits from a distinct microclimate caused by the cold winds coming from the snow-capped mountain summits, from the fresh sea air and from the heat coming from the deserts of Guajira. The zone is abundant naturally occurring water sources, counting numerous springs and rivers, and boasting a rich biodiversity. The native species found in the zone include: tapirs (Tapirus terrestris), jaguars (Pathera onca), bush dogs (Speothos venaticus), various breeds of toads (Atelopus spp.), Blue-billed curassows (Crax alberti), peacocks and the Santa Marta Conure (Phyrrhua viridicata), an endemic breed of parrots.

The Sierra Nevada in Santa Maria has been left open to increasing destruction and its biodiversity is now on the brink of extinction. Only 15% of the original primary forest in Sierra Nevada now remains and 12 of its native animal species are at a critically high risk of extinction, a situation which has been brought about (in part at least) by the proliferation of cocoa plantations and cattle ranches in the area.
The native local population is made up of the indigenous Cogui and Arhuaco people, as well as farmers originating from other areas. The available natural resources in the region are currently being used at a disproportionate and unsustainable rate due to the widespread poverty which most people living in the area find themselves in. Opportunities for employment are few and far between so the local population are reliant upon cultivation (of crops such as yucca, bananas, malanga cocos – a yam like vegetable- and corn), hunting, fishing and the sale of wood and coal, in other words activities which put enormous pressure on the natural ecosystems.

The main aim of the project is to ensure the restoration of the Sierra Nevada’s forests by replanting varieties of trees suited to the environment and replacing the wood which has almost disappeared from peasant farms, in order to propose reforestation as a new and sustainable economic alternative. This project is being led by an association of former illegal loggers (Union Salva Bosque: ‘The Union for the Protection of the Woodland’), who have realised that their previous actions had damaging effects and who now hope to atone for these errors by developing more sustainable forms of economic activity.
The project places a particular focus on the introduction of the Noya Maya (Brossium alicastrum), an endemic variety of tree which was once highly regarded in the region but which has recently been undervalued and thus left open to the threat of commercial forest exploitation. In fact, this variety of tree’s multiple properties means that its presence and its sustainable usage can help boost biodiversity, fertilise acidic soils, increase the profitability of a cattle ranch and provide a more reliable food source for local populations.
The three different branches of the project are therefore : 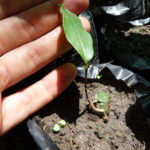 1) Reforestation in zones which have been damaged by agricultural exploitation and adapting peasant’s crop cultivations or cattle ranches to cope with the consequences of climate change.
2) Devising economic alternatives to deforestation for those currently involved in illegal logging but willing to develop alternative, sustainable economic alternatives by sellingwood-based products in partnership with new nursery or reforestation schemes. 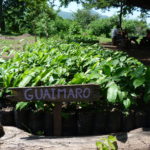 3) Improving living standards in local peasant communities, especially for local women, by improving the profitability of cultures and ranches, introducing communal crop cultivations and the consumption and sale of foodstuffs of high nutritional value produced by the Noyer Maya.
The first phase of the Noya Maya project was set into action in partnership with the Fondation Nativa (‘Native Founation’) between 2011 and 2013, a project which notably received support from the Fondation Léa Nature
We have already put several strategies relating to this project in place: find out more about them, and get the latest project updates here http://lci.tf1.fr/reportages/videos/replay-reportages-du-24-mai-2015-8611552.html