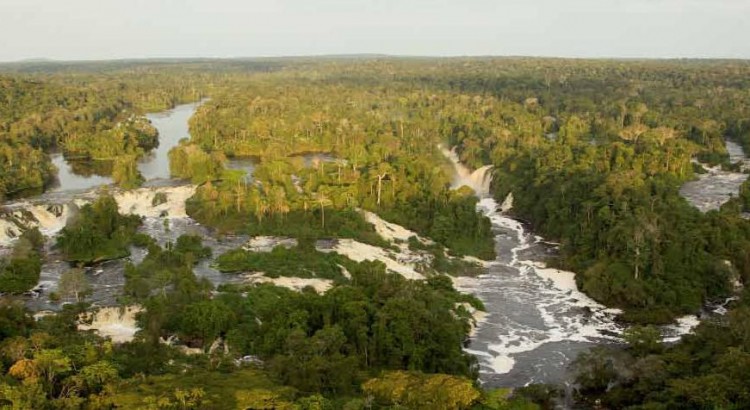 Water! The forest gives us
Water to drink,
Let’s look after it

Forests help to ‘cool down’ the Earth through their role in water evaporation, which creates clouds that reflect back sunlight. The Amazon forest sees the evaporation of 8 million tons of water vapour every year. The forest creates fresh water runoff for the streams and rivers, and helps pull rainfall in coastal areas inland. In India, deforestation has caused a 30% drop in rainfall.

The disappearance of forests and the end of Mayan civilisation

Research carried out by the climatologist Ben Cook has shown that the end of Mayan civilisation was mainly due to the effects of deforestation. According to his findings, the destruction of the forests led to lack of rainfall, which in turn set off the series of prolonged droughts which saw the end of their civilisation. This is because trees release water into the atmosphere through the process of evapotranspiration in their leaves, and they have a significant role to play in producing rainfall inland. During the pre-colonial Mayan era, deforestation led to around a 10-20% drop in rainfall, which in turn caused the drought which is believed to be behind the disappearance of the entire civilisation.

A 2005 study carried out by NASA revealed that the smoke produced during forest fires inhibits cloud formation, which ultimately means less rainfall. Moreover, by turning rainforest land into crop plantations or ranches, we reduce the surface area of the Earth able to reflect back the sun’s rays, we absorb less of the sun’s energy (through photosynthesis), and we disturb the patterns of the water cycle [1]. This is because forests play the role of natural pumps, sending precipitation which gathers in coastal areas further inland.

Rainforests also ‘cool down’ the Earth by evaporating vast quantities of water, which creates clouds that reflect sunlight back into space. The Amazon forest alone sends 8 million tonnes of water vapour back into the atmosphere each year.

Historic deforestation in India has brought about a change in the monsoon cycles, and a 30% drop in rainfall during the season. The consequences can extend far beyond the areas where deforestation is taking place: Deforestation in the Amazon, for example, has a knock-on effect on rainfall from Mexico to Texas, and the rainforests in south Asia are responsible for rain as far as the Balkans.

Also worth mentioning is the fact that the role that rainforests play in regulating the rate of water supply is worth an estimated 5235$ per hectare per year – and that’s not counting other kinds of forests (as calculated in 2007).

Besides simply providing us with this water, the forest also purifies it for us. In fact the rainforest acts in the same way as a water treatment plant: filtering out heavy metals and nitrates through the roots of the trees from the water before it makes its way through the water table and alond the rest of the water cycle. Three quarters of safe drinking water comes from water basins which begin in forests: forests are responsible for purifying the water drunk by two thirds of the major cities in developing countries.

Another example, this time of the situation in a developed country, is in the city of New York, where the local government has expressed a wish to restore the natural ecological purifying functions of the water basins from which their water originates, rather than building a new water treatment plant (Total saving: 80% of the cost of building a new plant, before factoring in running costs).

Forests: The best form of insurance against water damage

Forests are the Earth’s best natural barriers against the risk of flooding, landslides and extreme storms. For thousands of years, they have played a protective role for thousands of people, living inland or by the sea, by acting as a buffer between water, wind and people’s homes.

They also control water runoff rates by collecting rainwater and allowing it to flow away in a steady stream, thus reducing the risk of flooding and landslides. This also prevents soil erosion, which means that less Earth and fewer nutrients needed for agriculture are lost.

The crucial services which forests have to offer us, such as regulating rainfall patters, are coming under increasing threat. Will the story of the disappearance of the Mayan civilisation become our own, as we find ourselves incapable of learning from past mistakes?

[1] Study by Cook, with the NASA Goddard Institute for Space Studies (GISS) and the University of Colombia Lamont-Doherty Earth Observatory in New York City.

(in French) A recent article in Monde.Fr on the same topic.