What is a forest?

Forests are lands spanning more than 0.5ha, with trees higher than 5m and a canopy cover of more than 10%, excluding land that is predominantly under agricultural or urban land use (FAO). Therefore, fruit trees or palm oil tree plantations are not considered as forests.
Forests cover 31% of global land surface and house a very important biodiversity. A third of forests are primary forests where there are no clearly visible indications of human activities and the ecological processes are not significantly disturbed.
Worldwide, there are five types of forests: boreal, polar, temperate, subtropical and tropical (with the Amazon and a mosaic of various forests). The largest part of the forest (45%) is found in the tropics.

For more information: The State of the World’s Forests 2020. Forests, biodiversity and people. FAO & PNUE.

The Role of Forests

Forests have a key role in the conservation of social and ecological balances. They provide a wide range of services:

Nowadays, almost 1.6 billion people depend on forests for their survival.

Forests disappear among other reasons because their value is under-estimated and our market economy can’t recognize the ecosystem services they provide.

World forests are in danger. Each year it’s the equivalent of Greece surface that disappears.

Deforestation means less trees to capture CO2 but also to boost evapotranspiration, which affects rainfall patterns, increases drought and fosters wildfires…which are in turn responsible for CO2 increase by freeing up carbon contained in soils. A catastrophic scenario that plays over and over and ever faster with climate change.

To get more information:

Amazonia, mythical forest in South America, is the largest tropical forest in the world. It accounts alone for 2/3 of world tropical forests, 5% of Earth’s surface area and 14 times France’s. Beyond the myth of an uninhabited “virgin forest”, it is a life source for 30% of global fauna and flora but also for many indigenous populations. It also accounts for 20% of available fresh water on Earth. Extremely complex and highly fragile, this forest is at the heart of conservation issues and constitutes Envol Vert’s field of action.

Especially rich, it is therefore vulnerable. The biggest threat for Amazonia, is cattle breeding: in 2016, the expansion of pastureland in Latin America and in particular in Brazil accounted for more than 80% of deforestation. To which can also be added intensive farming (in particular soy monocrop), mining and forest fires related among others to slash-and-burn farming. Remember the violent wildfires of 2019 of which pictures had spread over the world. 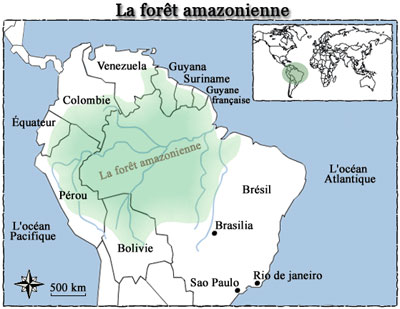 As for the French forests, it is fine. Or at least that’s what we are told.

Covering 31% of mainland area, its surface has increased by 0.7% per year in the las 30 years (IGN 2018). Behind those figures supposed to reassure us, hides another side which relates to quality, as well as unsettling practices. Softwood monoculture, clear-cuts, chemical treatments, trees harvested increasingly early, near-monopoly for forest seeds, fast mechanization with ever heavier machines: the French forest is being depleted and deteriorates. The recent and fast development of the wood fuel creates an increasing pressure: nowadays 60Mm³ of wood (millions of m³) are harvested per year; if the country low carbon strategy is applied, it will rise to 95Mm³ per year by 2050 (50% more) despite a recent study from the Fern which shows that maintaining the current levels of harvest while letting trees grow older and applying less intensive forest management practices would have far more positive effects for carbon storage, biodiversity and resilience to climate change. This would also boost local economies by localizing the supply of timber for buildings and furniture, which is currently mostly imported. French forests are at a crossroad; which path will we choose?

In 2020, the Covid-19 health crisis highlighted the relation between the increase of outbreaks since the 1940s and the destruction of natural environments. As a matter of fact, deforestation leads to migration of wild animals, which can therefore more easily come into contact with pet or farm animals, or even directly with humans. Moreover, the decrease of biodiversity reduces the ecosystems’ ability to regulate pathogenic agents. Finally, as it contributes to speeding up climate change and soil depletion which don’t suck up water anymore, deforestation allows especially to the spread of disease-carrying mosquitoes.

Reforestation is a necessary and urgent action. Planting trees, when it’s correctly done, can restore ecosystems, revive biodiversity and reduce Carbon emissions. According to a study published in 2019 in the Science magazine, it would take planting 500 billion trees to reduce atmospheric carbon by 25%. But planting trees is not a magic solution. On the one hand, it must be done correctly, that is while respecting diversity and local species as well as ensuring the maintenance and lifetime of these trees. On the other hand, planting trees on one side while emitting huge quantities of CO2 on the other (the principle of “carbon offset”) only eases the consumers’ guilt and greens up the image of polluting companies. The most efficient solutions are still the reduction of carbon emissions and the conservation of natural areas.